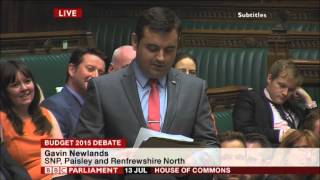 Gavin Newlands, the MP for Paisley and Renfrewshire North, delivered his maiden speech to the House of Commons, as MPs debated the UK Government’s budget on Monday. Gavin used his maiden speech as an opportunity to tell MPs about the great towns and villages of the constituency, saying that “Renfrewshire is a county with a proud past and a promising future. He went on to rail against the UK Government’s welfare reform and austerity programme, epitomised in the budget of last

MP HITS OUT AT QUEEN’S SPEECH

TIME FOR BOJO TO GO